Beating Torino 3-2 in Turin last night certainly meant a lot for Wolverhampton Wanderers fans, who now feel much more confident about the second leg of the Europa League playoffs.

We admit we expected the Italian media to be quite disappointed with the result today, but it turns out that they are still hopeful they can get the qualification at Molineux.

Turin newspaper Tuttosport brings today stories saying ‘it isn’t over’, with sentences and quotes showing their belief in the Serie A side.

Some of Wolves’ superiority is accepted for being a Premier League club with a bigger budget. That’s what Torino manager Walter Mazzari talked about after the match.

He said: “The club handles the market, I give directions and that’s it. The English, however, have incredible resources, in these two years they have bought players for €40m, it’s natural that they have a very high quality. But we can’t stick to this, doing good things last year we have often made up for the technical difference against the best teams.

“We will have to be less naive and fearful. More aggressive. If we play as we know, we can still do it, even if they are also ahead athletically, the Premier League started first. But I’m not looking for alibis, I’m not interested.” 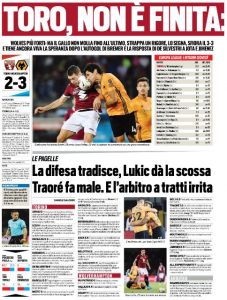 Tuttosport also rated all of Wolverhampton’s players, with the lowest being to Rui Patrício, who got a 6, and the highest to Adama Traoré, who got a 7.5.

Someone who received an even smaller rating was referee Soares Dias, with 5.5.

The Turin press had already criticised the fact that UEFA chose a Portuguese official for a Wolves match, and now, they’ve complained a little more about him.

Tuttosport wrote: “The throw-in he reverses in favor of Wolves at the start sounds like an alarm bell for the Great Torino that mumbles: performance at times stringent and never impeccable, with judgment – on the interpretation of fouls and bookings with irritating traits. Fortunately, he gave the penalty.”