The goalkeeper continued in the US for the first half of the 2019 MLS season and joined the Premier League winners in the summer.

Pep Guardiola allowed Steffen to join Fortuna Düsseldorf on a season-long loan deal to get experience of playing in Europe.

Earlier in July, Sport Bild reported the City boss recommended the German side to sign the keeper. Steffen has so far made two appearances for Düsseldorf and conceded two goals in the process.

This season, 10 Bundesliga clubs have foreign keepers and Sport Bild takes a look at the situation.

Regarding Steffen, the report claims he is comfortable to play with both feet, has safe hands, is strong in one-on-one situation and uncompromising in the air.

Sport Bild have hailed Steffern and they are of the belief the 24-year-old can be one of the top six goalkeepers in the Bundesliga.

Guardiola receives information about the Manchester City loanee’s progress every week, who has the aspiration to become the first choice keeper at the Etihad. 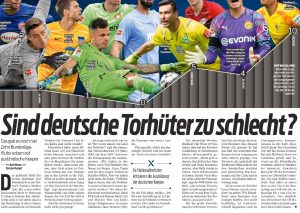 Claudio Bravo’s contract runs down in 2020 and with Guardiola keeping track of Steffen’s development, it could be vital in deciding whether or not he can be second choice behind Ederson next season.

The report also explains Dusseldorf could retain Steffen until 2021.