In December 2018, Major League Soccer side Columbus Crew SC agreed a deal with Manchester City for Zack Steffen to join the domestic treble winners this month.

Sport Bild claims Pep Guardiola is unsure if the goalkeeper will be granted a work permit immediately to play in England, and there’s not really room for him anyway.

The former Barcelona manager’s idea is to allow the 24-year-old to join Fortuna Dusseldorf on a season-long loan deal so that he can get experience of playing at a high level in the Bundesliga.

It’s explained the contract has already been worked out and Guardiola’s personal recommendation has helped Dusseldorf take the custodian on a temporary deal.

The deal has not been completed yet, but the shot stopper is expected to join the German club’s training camp in Austria later this month.

Dusseldorf will get Steffen for a bargain price as the figure is tied down to the performance. The fee, at most, including salary, will be around €1m. For this, Steffen has to be the first choice keeper at Dusseldorf and if not, the overall figure will go down. 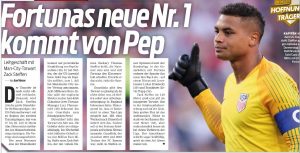 Steffen is currently with the United States national team preparing for the 2019 CONCACAF Gold Cup semi-final clash against Jamaica.