It’s easy to imagine that this morning wasn’t a very nice one if you have any association with Tottenham Hotspur.

Last night’s 2-7 defeat at home to Bayern Munich was, to put it frankly, an embarrassment for everyone involved.

While Bayern were lauded for a clinical display, even if it’s not the first time they’ve put one on in North London, Spurs faced criticism from all corners.

The English media were particularly cold when it came to dissecting the mess that was Tottenham’s performance and it was a similar case over in Germany.

TZ are the fairest of the lot, saying Spurs showed ‘a spirited game’ in the final third but lacked Bayern’s ‘mentality’. In the end, they describe the result as a ‘madness’ and say Bayern ‘outclassed’ Tottenham.

Frankfurter Allgemeine also give Spurs a little credit, saying they ‘dominated’ the first 30 minutes before that all came crashing down as they ‘broke apart’ in the final phase of the game.

Der Spiegel are also effusive about Spurs’ performance in the first 25 minutes, admitting they were the better team and saying that anyone who only saw that period would ‘fall from the clouds’ if they saw the result.

After that, they are less than complimentary. They say there are ‘no words for how badly Tottenham defended in the second half’, questioning how last year’s finalists can ‘fall apart like that’.

Their ire is aimed at the players in particular, stating that Spurs’ stars made ‘catastrophic mistakes’. Christian Eriksen gets specific criticism, with the newspaper saying he was ‘defensively absent like his teammates’. In conclusion, they call it a ‘Spurs debacle’.

And if those reports don’t provide enough evidence for how lowly Tottenham’s performance ranked among the German press, their ratings will.

The player ratings are very different from what you’re probably used to, with Germany doing things a little differently. While most ratings are out of 10, or sometimes 5, Bild use the German school grading system. 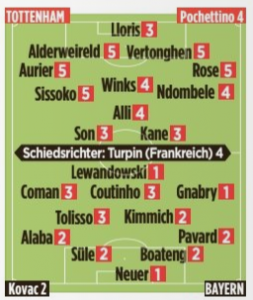 A 6 is the lowest possible score and, taking it back to the school grades; it means that not only were things not up to standard, but there was even a failure to understand the basics.

Bild were extremely unimpressed, handing the entirety of Spurs’ defence a five (or deficient) rating, while Harry Kane and Son Heung-min get their best scores, three (or average).

It’s worse in Kicker, where Hugo Lloris gets a four (passable) but the rest of his defence all receive five or higher. Toby Alderweireld is handed a six, which is as low as it can get (we know, it’s confusing). Son gets a two, which in light of his teammates’ rankings, is a miracle.