RB Leipzig are trying to remove the release clause in Dayot Upamecano’s contract after Arsenal bid for the defender this summer.

The 20-year-old was linked with the Gunners during the summer transfer window, with several reports saying they made a €60m bid for his services.

SportBild back up those claims today, confirming that Arsenal did indeed bid that amount and RB Leipzig rejected it.

The Bundesliga side are now working to get Upamecano signed up to a new contract as soon as possible, despite the fact his current deal doesn’t run out until 2021.

That’s because his current contract includes a €100m release clause, which is set to drop to €80m next summer, and that’s a point of concern for RB Leipzig.

They’re seemingly fearful that someone, potentially Arsenal, will be willing to pay that price for the highly-rated defender and want to take it out of the equation. 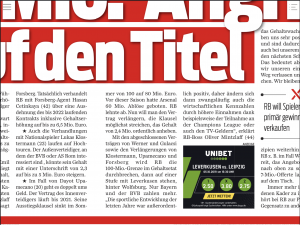 SportBild make no mention of whether Arsenal are still interested given they signed William Saliba and David Luiz this year, but it’s easy to imagine they are keeping an eye on this situation as any reduction in price would suit them perfectly.

This comes a day after L’Equipe claimed the release clause was set to drop from €80m to €60m, and it seems few actually know the details, other than the fact RB Leipzig want to get rid of it altogether if they can.