Home Europe “Made a good decision in the summer” – Player on his choice...
SHARE

Atletico Madrid signed Jonathan Castro Otto, simply known as Jonny, from Celta Vigo in the summer and immediately loaned him to Wolverhampton Wanderers for one season.

The 24-year-old has started in every league fixture for Nuno Espírito Santo’s side and he even found the back of the net on one occasion against Southampton.

His form for the club saw Luis Enrique include him in the Spain squad for the international fixtures against Wales and England.

The defender has already played under the national team coach when the two were at Abanca-Balaídos and it was the former Barcelona manager who moved him from the right side of the defence to the left.

Jonny sat down for an interview with Spanish newspaper La Voz de Galicia and admitted that the call-up was a surprise, while he also suggested that his inclusion in La Roja squad shows that he was right to join the Premier League outfit.

“It’s very difficult to come here [Spain call-up]. No, I did not expect it [to be included in Spain squad] in September or now. With all the great players there. I know it is complicated to call me,” he explained. 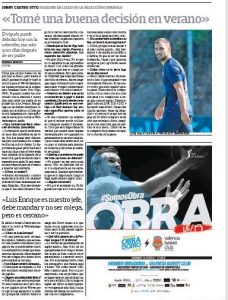 “But this seems to confirm that I made a good decision in summer. Now I have to keep working to keep improving and keep convincing my manager and the [Spain] head coach.”

It’s all going well for Jonny and Wolves and fans will be sorry to see him return to Atletico Madrid next summer.