After nearly a year of articles claiming Manchester United and José Mourinho are watching Cagliari’s Nicolo Barella, perhaps even making an offer over the summer, it’s Chelsea who are ready to make the next move.

This is what Unione Sarda, a local newspaper, are reporting on Wednesday, revealing the Blues are ready to put €45m on the table to bring in the newly capped Italy international in January.

It all sounds very exciting, but considering the outlet make it clear this isn’t coming from either Cagliari or the player’s entourage (‘deafening silence’ on both ends), it appears to be stemming from England.

That’s not a bad thing in itself, as it would suggest Chelsea really are interested in the player, but it doesn’t give us any indication as to whether the move will go through.

Barella has previously explained he’d probably finish the season with his current side, knowing he’ll get more football there than anywhere else for the time being, and Cagliari have said time and time again that €50m would be the minimum they’d be willing to start negotiations at.

Two stumbling blocks for the Blues, who appear to be starting their bidding a bit lower than that. 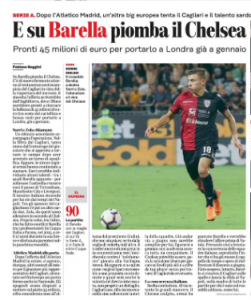 The idea of bringing in the 21-year-old stems from Maurizio Sarri, who has identified a number of talents for his Chelsea side going forward, but also from Gianfranco Zola, who knows Barella personally.

Now assistant at Stamford Bridge, the 52-year-old was briefly Cagliari manager between December 25th 2014 and March 9th 2015, a period during which he gave the young midfielder his first taste of professional football in a 2-1 loss to Parma in the Coppa Italia.

Atlético Madrid are mentioned as competition, but their reluctance to go any higher than €35m doesn’t appear to really threaten Chelsea’s potential attempts, who would apparently like to get a deal done before Christmas.

Unione Sarda point out it remains to be seen how Cagliari’s directors will react to Chelsea’s €45m offer should it come in, and the same applies for Nicolo Barella himself.

They also state that while the midfielder is a huge fan of his current club, moving to Stamford Bridge could present the perfect opportunity for him to play at a higher level without ever having to deal with the difficult prospect of facing the Serie A side, which would happen if he switched to another club in the league.

These are big claims, but until an offer is officially made, it’s also just talk.

Actions speak louder than words and all that.