Seen as AS Roma’s potential replacement for Kevin Strootman, Nicolo Barella is causing quite the stir in Italy this season, with a number of high profile teams, such as Inter and Juventus, also joining the queue for the 20-year-old’s services.

However, his performances for Cagliari have caught the eye of some foreign clubs, and Corriere dello Sport reckon that Manchester United (above all) have ticked the midfielder’s name for next summer.

Considering his side are currently asking for around €50m in order to convince them to part ways with their starlet, it seems unlikely Barella is the type of player the Red Devils would take a gamble on in January. 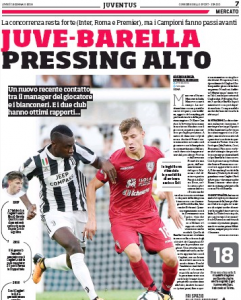 With Alexis Sanchez, an experienced and Premier League ready player, allegedly on the way to Old Trafford, the signing of a young talent like the young midfielder will probably be left for the summer, if it even takes place at all.

We all know Manchester United (and other English sides) are often used to make things more exciting than they are, and it wouldn’t be surprising if this was just one of those moments.