The Portuguese media continues to be delighted to hear anything that Liverpool players have to say about the Champions League clash against Porto.

Yesterday, we’ve covered Roberto Firmino’s interview with newspaper O Jogo, which even made it to their front page, where the striker claimed it wouldn’t be impossible for the Dragons to make a comeback from the 5-0 score in the first game.

Now it was Mohamed Salah who spoke to Diário de Notícias about the match, and the fact that he praised a couple of Porto players has obviously made it to the headline.

“It is very important for me to represent not only my country,  but also a continent like Africa. I’m proud of that”, Salah told Diário de Notícias. “I’m sure the Africans of FC Porto too. They are three great players, Marega and Aboubakar score many goals and Brahimi is a talent. I’ve known him for a long time and he’s one of the most dangerous players. We have to stop all FC Porto players, but Brahimi is special.”

“Iker Casillas is one of the best goalkeepers ever. It will be a privilege to play against him, one of the greatest symbols of this sport in recent years. Scoring a goal against him? If I have the opportunity I’ll try to do it, of course, but the most important thing is that Liverpool win, either with a goal of mine or another teammate.” 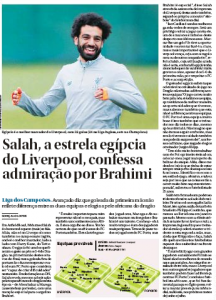 Speaking of tonight’s game, Salah made sure to say that the clash is still open and Porto can still get the qualification at Anfield: “The game went very well for us, we studied the team, we made the best of the opportunities we had, but we also know that this is not the difference between the teams.

“FC Porto are a very good team and this is also what the manager tells us every day, even after the victory there. I don’t imagine that we will not go forward, but if we are not careful they may surprise us too.”

Asked about his first season working under Jurgen Klopp, Salah said his success at Liverpool has a lot to do with the positioning chosen by the German manager: “It’s been great working with him. He was the first manager to put me playing closer to the goal and the attack. In fact, he told me from the beginning that I had to be always closer to the attack and that worked. I identify with his style of play, offensive, and maybe that’s why things are going very well this season.”

Finally, the player talked about the success fo his attacking partners this season: “It’s very easy to play with great players and Firmino and Mané are currently among the best in the world in their positions. Things have worked out between us, but Liverpool have other great players who can also make a difference against FC Porto.”