Coming off injured after 36 minutes in Barcelona’s 1-0 win over Atlético Madrid over the weekend, Andrés Iniesta was expected to be out for around a month.

However, news from Spain is now filtering that the 33-year-old, who was a major doubt ahead of the Champions League clash against Chelsea, will do everything he can to play against Antonio Conte’s side next week.

The good news for Iniesta was that the tear in his femoral bicep wasn’t more than three centimetres. 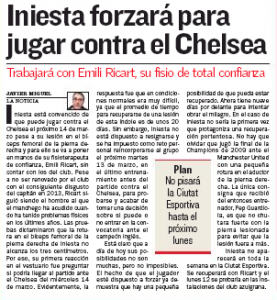 However, under normal circumstances, even with that information, a return in just over a week is very unlikely, with 20 days the expected convalescence period.

AS state that, as of now, his chances of making the squad to face Chelsea aren’t great, but are also not impossible, and the player is prepared to force the issue.

With nine days of rest, Iniesta will spend time with Emili Ricart, the physio he trusts most, until March 12th, at which point an evaluation will take place to see if he’ll be ready to play against the Blues, at least for a bit.

This won’t have been the first time the veteran midfielder has done this, playing with a small tear in his right leg during the 2009 Champions League final against Manchester United.