Transferring to Barcelona from Manchester City’s reserves back in 2013, Denis Suarez enjoyed quite a few games in a very competitive side during the first half of the season, but has disappeared since 2018 reared its head.

Playing two games in the cup and one minute in the league, Sport on Tuesday explain it’s got nothing to do with the midfielder, but everything to do with Pep Guardiola’s side.

In fact, the Catalan newspaper make it very clear that Denis Suarez has remained the same, training as hard, but that the €800k Barcelona have to pay the Cityzens for every 10 games he features in (with a minimum of 45 minutes played) have caused him to vanish from match day squads. 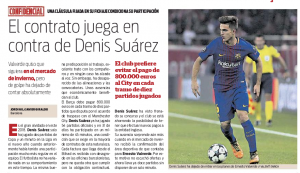 Sport state that every invoice Barcelona receive from Manchester City is met with ‘displeasure’, and there’s a reluctance to pay the agreed amounts, even if they have to respect the contractual conditions.

That’s why, instead of refusing to pay, Denis Suarez just won’t play, or will just be used as a cup player.

A sad situation for the young midfielder, but if that’s the case, he probably won’t be short suitors when he looks for a move in the summer.