In their Wednesday edition, Sport report the Netherlands international ‘may be’ the Catalan club’s next signing. The midfielder has given his ‘OK’ to joining the La Liga side on a three-year contract, and ‘negotiations are well advanced’ for the move.

Koeman, who knows his compatriot from his time with the national team, became aware the 29-year-old was studying options to leave the Reds.

The former Newcastle United man is in his final year of contract at Anfield and has so far refused to sign an extension, explain Sport.

Jürgen Klopp’s side offered Wijnaldum a two-year deal, and are unlikely to push hard for his continuity. Sport state the English champions ‘don’t want to retain’ him without a renewal.

Barca acted quickly to reach an agreement with the Dutchman and they are now waiting for Liverpool to ‘agree to an affordable transfer’ in the coming days. The negotiations with the Merseyside club are presented as being on the right track. 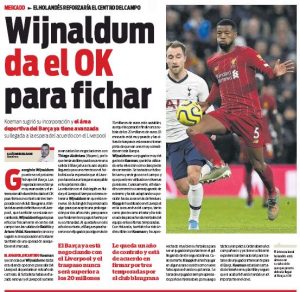 According to the report, the Spanish giants are hoping to sign Wijnaldum for ‘little more than €15m’ plus variables, while making sure the overall fee is not more than €20m.

Koeman would be delighted to have the Liverpool player at the Camp Nou and Sport are of the belief Wijnaldum will have an important role in Barca’s starting XI under the Dutch manager.