Home Europe Liverpool named as ‘almost certain’ destination for Portuguese player, ‘could be on...
SHARE

Liverpool are getting close to signing André Cardoso, according to Portuguese newspaper Jornal Madeira today.

The 18-year-old, who’s leaving Sporting at the end of his contract this summer, ‘could be on his way’ to Anfield, the report says.

It’s claimed the Reds have been in contact to sign the teenager and a deal could be found soon, with the next few days being decisive.

Liverpool aren’t the only club in the race, since other Champions League sides want Cardoso as well, but the Anfield side are the only ones named in the story. 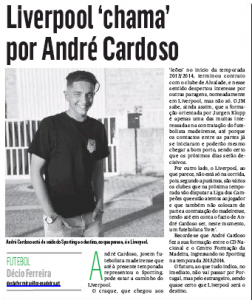 Jornal da Madeira claims it’s ‘almost certain’ that the Reds are landing the youngster, who couldn’t manage to make a debut for Sporting before walking from the club for free.

To be fully honest, this is probably the first time we cover claims from Jornal da Madeira, who are a local newspaper from the Portuguese island. So let’s see if this story gets a bigger attention in the local media in the next few days.