According to Fotomac, Liverpool have joined Udinese and Arsenal in the race to sign Besiktas midfielder Dorukhan Tokoz.

The 23 year old was in impressive form during the recent international break and his display against France has brought him to the attention of some major clubs in Europe. The youngster scored in his side’s 2-0 victory over the French.

He was also key in the Black Eagles getting a Euopra League spot for next season.

Fotomac claims Besiktas have already rejected a €8m offer from Udinese and that Liverpool are now interested in the player, along with fellow Premier League side Arsenal.

It’s reported the Champions League winners are following Dorukhan’s performances, but have yet to make an offer for the player. 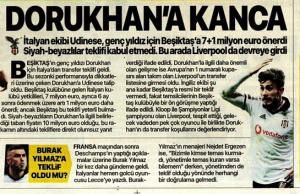 Fotomac say Liverpool will continue to monitor Dorukhan’s progress and they could make an offer for the Turkey international in the future. It’s not reported if Arsenal will do likewise.

Tokoz’s contract with Besiktas will expire at the end of June 2021.