After appointing Jonathan Woodgate as the club’s new head coach, Middlesbrough are keen to add to their squad this summer and are reportedly interested in Fenerbahce forward Michael Frey, claim Turkish newspaper Fotomac.

The Swiss striker has recently been linked with Leeds United, and Fotomac today claim the 24 year old is now a transfer target for Middlesbrough.

It’s reported Boro are ready to pay up to €5m to sign Frey, and the Turkish club are ready to part ways with the former Lille man after a disappointing debut season in Turkey.

Again, Fotomac back up Leeds United’s interest in the former Switzerland U21 international, and the Marcelo Bielsa’s club are still in the picture.

Frey was signed last summer from Zurich for €2.5m but the Swiss striker has failed to prove himself in the Super Lig due to a loss of form and injuries. 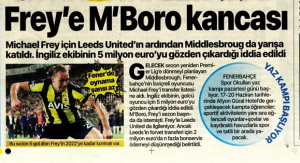 Subsequently Fenerbahce are looking to sell the player in this window despite the recent departures of Roberto Soldado and Islam Slimani.

Frey made 25 appearances for Fener last season, scoring 5 goals. He is under contract at the Ulker Stadium until June 2022.