Liverpool are increasingly being pulled into the transfer race for Jadon Sancho.

For a long time it was mainly Manchester United, with a side helping of City, being linked with the Borussia Dortmund player. The Red Devils continue to be in the picture, yet Ole Gunnar Solskjaer’s men are now repeatedly joined by Liverpool.

Friday’s edition of Bild details what is being reported as problems with the player’s behaviour. Ahead of the match against Barcelona this week, Dortmund manager Lucien Favre said Sancho wasn’t starting because he wanted players who were ‘focused and ready’.

The England international had been late for a team meeting, something which was quickly fed to the media, and there’s a clear attempt to paint Sancho as a bad boy.

When he did get on the pitch against Barca, Sancho scored a brilliant goal to give his team something to be happy about in a 3-1 defeat. 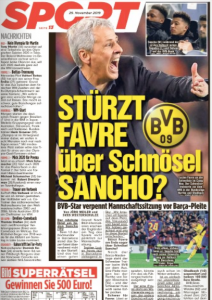 Bild reports the ‘hottest candidates’ to sign the player are Liverpool, Manchester United and Real Madrid.

It feels like speculation. Madrid’s local media certainly aren’t going strong on interest from that end, and online, but not in their newspaper, Bild say it’s the English media pushing the claims almost daily.

Germany’s media have been at it for months.