Ronald Araújo’s contract situation at Barcelona has resulted in him attracting interest from other clubs, especially from the Premier League.

Chelsea and Manchester United have been named as suitors over the past few days and are now joined by Liverpool.

Wednesday’s edition of Mundo Deportivo mentions the Reds as the defender’s suitor and adds Jürgen Klopp’s side have ‘shown more interest’ in the 22-year-old. However, they are behind the Red Devils in the transfer chase.

The Uruguay international was promoted to Barcelona’s first team in 2019 and has been a regular since December 2020.

His current deal at the Camp Nou runs down in 2023 and he is keen to continue with the Catalan club. 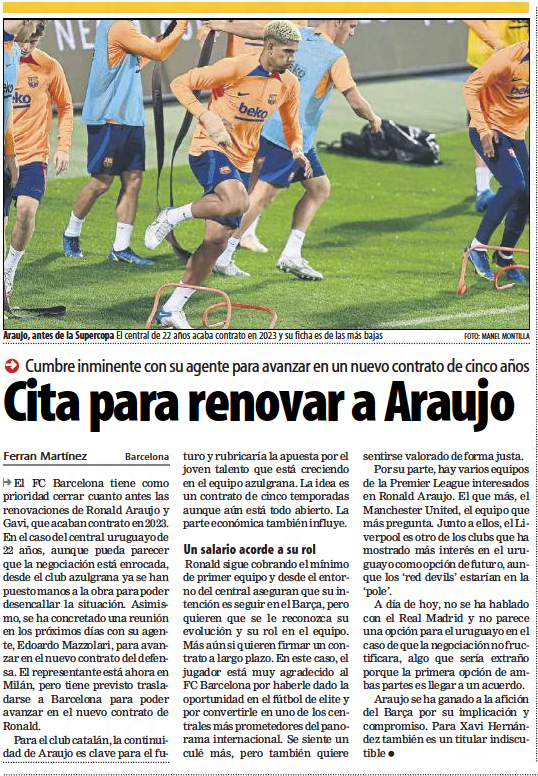 Xavier Hernández’s side are also keen to secure his long-term future and their idea is to offer him a new five-year deal. However, ‘everything is still open’ because the economic situation has ‘influence’ on his future decision.

The player’s current salary is less than most of his current teammates and he wants the La Liga side to offer him a new deal, in accordance with his performances on the pitch. He and his entourage want Barca to value and recognise Araújo’s role in the team.

Mundo states the South American’s agent, Edoardo Mazzolari, is in Milan and is expected to arrive in Barcelona soon, where he will have an ‘imminent summit’ with the Spanish giants to discuss Araújo’s renewal.

The first option for both parties would be to reach an agreement over a new contract, but with the likes of Liverpool showing interest in Araújo, the pressure is likely to be more on Barcelona.