On May 26th, we relayed news from Belgium that Liverpool have included Leicester City star Youri Tielemans in their summer target list.

The Reds want to bring in a replacement for Georginio Wijnaldum, who has confirmed his decision to leave Anfield as a free agent.

Earlier this week, reports in England stated the Merseyside club have identified the Foxes midfielder as a potential candidate to replace Wijnaldum.

Claims made in the British press have reached Belgium and Het Nieuwsblad on Thursday have provided their own information on this case.

Any potential approach from Jürgen Klopp’s side in signing the former AS Monaco man will see them spend big because Leicester want €70-80m for Tielemans.

It’s claimed Liverpool are not the only club interested in Brendan Rodgers’ man and the suitors could increase if he manages to shine for Belgium at the Euros.

Klopp’s side, however, have the ‘advantage of playing in the Champions League’, in their chase for Tielemans, something Leicester cannot offer next season. 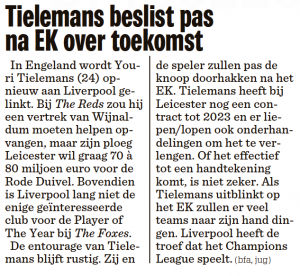 As of now, the player’s entourage ‘remain calm’ because he will only make a decision on his future after Euro 2020.

Tielemans’ current deal runs down in 2023 and there are talks with Leicester to extend the contract.

Whether or not the FA Cup winners will be successful remains to be seen.