Liverpool are one of the clubs ‘interested’ in AS Roma’s Lorenzo Pellegrini, according to Mundo Deporitvo.

The newspaper focuses on Barcelona’s desire to bring the midfielder to the Camp Nou because they want to strengthen the position next season.

Georginio Wijnaldum, who has confirmed his exit from Anfield, was close to joining Barcelona before Paris Saint-Germain hijacked the deal. This has forced them to look for a new midfielder and they now have their sights set on Pellegrini.

Barca’s interest in the 24-year-old is ‘so serious’ that they have already approached the Serie A side to make an offer. The player is in favour of joining the Catalan club. His release clause is set at €30m, but the La Liga side don’t want to pay this figure.

The Italy international has a year left on his contract and has rejected the renewal proposal made by the Serie A side. José Mourinho’s side are increasingly convinced the ‘best thing will be’ to sell him this summer, in order to avoid losing him for free in 2022. 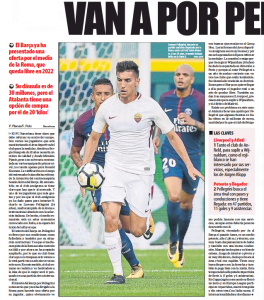 Madrid, along with Barca.

The Reds are ‘following’ him, ‘precisely to replace Wijnaldum’.

Out of the Merseyside club and Atlético, Mundo points out ‘especially Jürgen Klopp’s side’ are interested in the Roma player.

There’s also a suggestion that Atalanta have an option to sign Pellegrini for €20m, but this can only be done if they convince him to join them.