Unless you were living under a rock last summer, you’ll know all about Liverpool’s attempts to sign Piotr Zielinski, then owned by Udinese.

The Reds seemed set to sign the Poland international, until Napoli came along, who Udinese eventually ended up selling to, having forged a strong relationship in the past with the transfers of Allan and Duvan Zapata.

The 23-year-old midfielder enjoyed a solid first season in Naples under Maurizio Sarri, playing in all but two of their league games, and it appears that Liverpool’s interest has yet to wane.

According to Il Mattino on Wednesday, Jürgen Klopp is still very keen on Zielinski, and a first offer of £25m to convince Napoli to sell has already been made.

As expected, the bid has since been rejected by Aurelio de Laurentiis who will be 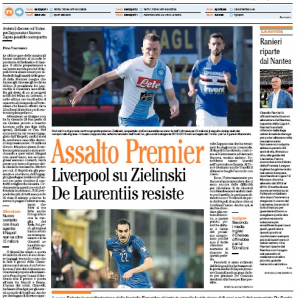 expecting a bid much closer to the player’s release clause, which currently stands at €70m.

His development last season suggests he could become a key figure at the Serie A side in the future, and if the interest continues, it wouldn’t be surprising to see him earn a new contract next season, just to ensure he stays with in the south of Italy a while longer.