Every day, it seems that Manchester United are getting ever so slightly closer to sorting out a deal with Inter for Ivan Perisic.

Unfortunately for them, the Serie A side are still holding out for more, with Corriere dello Sport on Wednesday reiterating they will not start negotiations until they see €50m on the table.

The Italian newspaper explain more discussions between the two sides took place on Tuesday, with Ed Woodward telling Inter they would be willing to increase their offer by a little more, which is still less than the asking price. 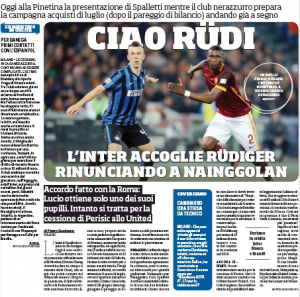 Small concessions here and there are what get these deals done, and with just over two weeks until the FFP deadline falls, before which Inter need to raise €30m, a deal is likely to be struck soon.

Our bet, looking at the way things have been going, is that a deal will be struck by the end of the month, and it wouldn’t be surprising if the transfer fee ended up totalling €50m via bonuses.

We can’t see Manchester United starting negotiations at that price, and, as time goes by, Inter will be getting more and more desperate for the money, leading to them agreeing a lesser fee that still makes them look good on paper.