Julien De Sart is a hugely likeable footballer. Candid in his interviews, the 20 year old seems so much like a normal young man that it’s no surprise he was so impressed by the ‘real England’ of Middlesbrough.

Whilst the footballer’s time at the club may not have gone entirely to plan, he’d wanted to be a success playing for Middlesbrough, the move itself has helped De Sart mature, with Belgian magazine SportFoot calling it his Erasmus.

Much of the interview is concentrated on what a wonderful time De Sart had at Boro, and he kicked it all off by explaining: “I enjoyed Middlesbrough because it’s the real England. Food, people, their accent… They are very theatrical. For example, once, I am in a restaurant and I order a ‘Milanese’ escalope.

“They bring me that with beans, without pasta… I didn’t really expect it (laughs). I visited all the major cities of England: London, Manchester, Birmingham, Nottingham, Leeds, Newcastle, York… I can say I had the real English experience. Without this trip, I wouldn’t be the player I am today.

“I learned so much in a very short time. I saw the evolution of my game in three months, it was incredible, although I didn’t play much at first. When I came back with the Espoirs (Belgium’s youth sides), I saw that I had become another player. My body, my approach to matches, everything. I felt as if I had made a ten-step leap forward.”

After explaining that the brilliant diets and programmes at Middlesbrough helped him gain needed weight, De Sart excitedly added: “I knew another culture, another football. I met Stewart Downing, Victor Valdes, Alvaro Negredo, Jonathan Woodgate and coach Aitor Karanka. I was like a kid, it was Disney for me. I had eyes full of stars.

“I was happy to be with them and we really had a good relationship. Every morning I had coffee with Victor Valdes, and we laughed. I spoke to him of Barça, Iniesta, Xavi, Ronaldinho… A little bit of the Standard, although it was not a very good period for him. We were talking about Liège. I was happy because it’s my city.” 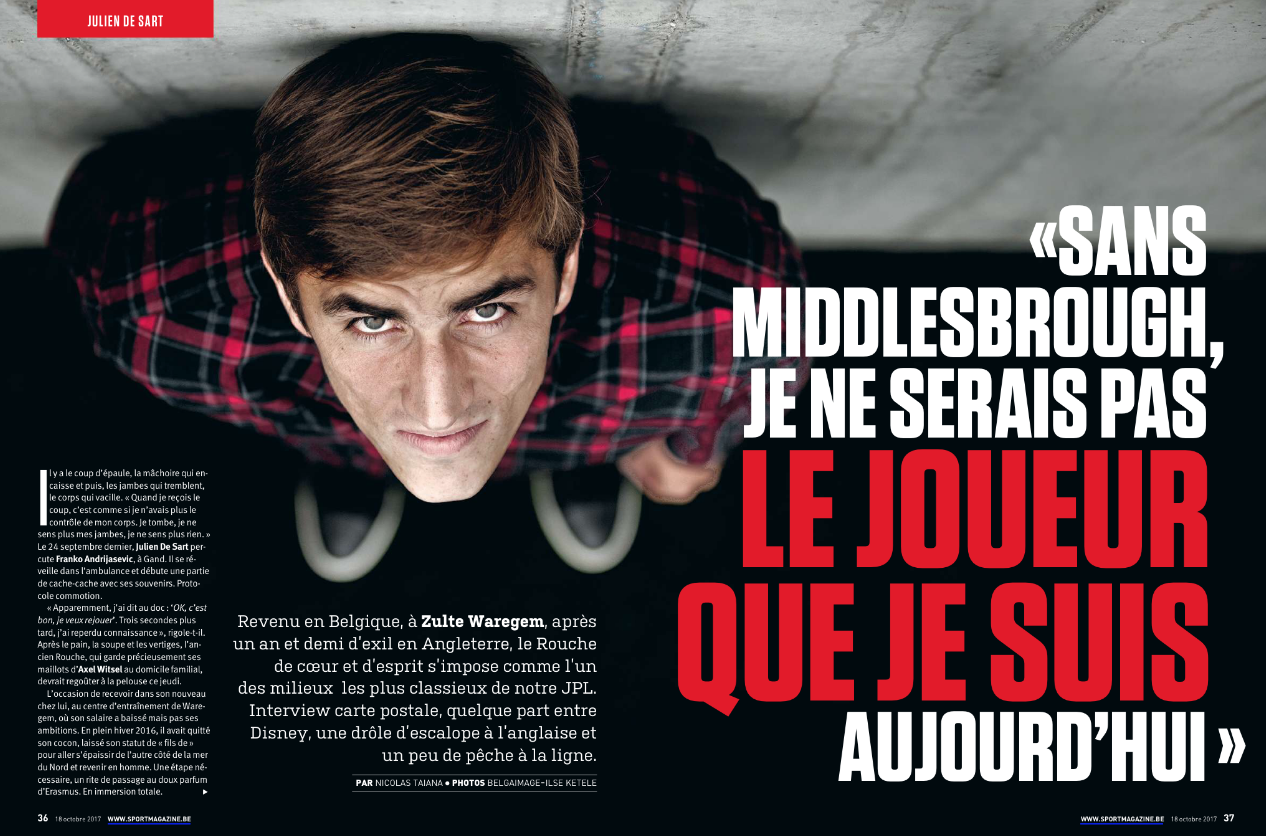 Perhaps blown away by De Sart’s enthusiasm for a club it could be considered he failed at, SportFoot asked if he was disappointed he didn’t really play for Middlesbrough, and still it was hard to draw any negativity from the young footballer: “It wasn’t a problem at all. I have lived through it. Every morning, I was happy to get up to go to training. I was having breakfast at the club, talking to the people… When it was over, I had to go home, I was rattling. I still wanted to train. I had so much fun, I felt it was good for my game. My only regret is not having had a chance in the Premier League.”

With a Middlesbrough contract until June 2019, De Sart could still return to a club he clearly feels a great deal for. First he needs to impress at Zulte Waregem and with the Belgium club having a buying option, the loan could turn permanent.

Questioned on the difficulties of managing the situation mentally, De Sart gave a typical answer: “It’s very special. You almost feel like an object. We say we are between two clubs, that I belong to both. In my head, when I’m at Zulte Waregem, I’m 100% a Zulte Waregem player. But I’m also 100% a Middlesbrough player because I still belong to them. It’s weird. If I have to stay here for three years, I will stay for three years. If I have to go back to Middlesbrough, I will go with the same enthusiasm because, whatever happens, I will be ready.”