At the beginning of February both SportBild and Kicker pondered that Leon Goretzka could be on his way out of Schalke. The German club are struggling to get into Europe, still 8 points off 6th place, and there was a feeling that without UEFA competition, Goretzka could leave the in the summer.

Liverpool were mentioned as a possible destination for Goretzka, and whilst their recent form won’t have helped, Jurgen Klopp will still be confident he can achieve Europa League at the very least.

Klopp’s Liverpool squad needs a boost in quality, something which is becoming clearer as the season progresses, and Goretzka would certainly provide that. The right footed central midfielder has a contract with Schalke until June 2018, so his price will be under pressure in the next transfer window.

Peter Neururer was Goretzka’s coach at VfL Bochum and believes the 22 year old can become one of the best. Speaking to SportBild, Neururer said: “The boy is on the way to absolute world class. I’m sure Leon Goretzka will be a big name in German football and a solid figure in the national team. 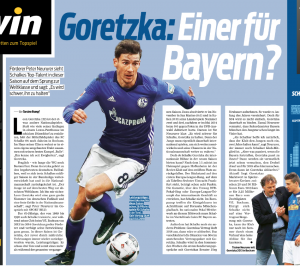 “It will be hard for Schalke to keep Goretzka. Because the boy has to play internationally (in Europe) on a permanent basis in order to develop and to keep his chances in the national team.”

SportBild have also suggested a Bayern Munich interest, which would be a problem for Liverpool. However, if Klopp can entice the youngster with a prominent role at Anfield then then the Merseyside club would have a good chance.

A lot will depend on what happens with Liverpool and Schalke between now and the end of the season. With Champions League football, Klopp’s chances of recruiting Goretzka and others will increase significantly.