Adrien Silva’s father isn’t very happy with the treatment his son is getting at Leicester City.

Manuel Silva has been interviewed by Portuguese newspaper A Bola this Friday, and has claimed that manager Claude Puel is being unfair to the midfielder’s situation at the club.

“We have a coach who is picking on the player and who is cutting his legs, does not summon him to the games and at this stage when the market is open he could be loaned with the option to buy and he doesn’t let him leave,” Manuel Silva told A Bola. “The coach now says he counts on him, but lets him go and train with the under-23s several times. Adrien respects the club and the orders that are given, but it’s time to clarify this situation.

“If they do not bet on him so loan him out, because he has proposals from some European clubs, among them French, which seems to be annoying Claude Puel. It is unfortunate what is happening, we are talking about a European champion and that if you do not play at your club you shouldn’t also be able to represent Portugal.” 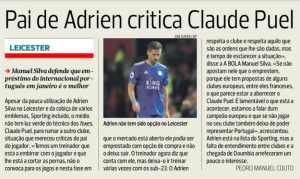 With half of the January transfer window gone and the player not getting a transfer, it seems that Manuel Silva, who also happens to be Adrien’s agent, really decided he should speak out on the situation.

He’s also spoken to French outlet FootMercato, making it very clear that the midfielder has several offers, and now depends on the Foxes to let him go.

“Adrien has not been summoned for several matches. It’s a decision of the coach that we respect. Adrien respects the club and the coach’s choices”, he said.

“We have proposals for a loan for the next six months in France, Spain and Italy. Adrien, he just wants playing time to find his place in the national selection of Portugal.”

Adrien Silva has only five appearances for Leicester City this season, two in the EFL Cup and three in the Premier League. The Portuguese press keeps insisting that Sporting would like to have him back, but the Foxes have been tough in negotiations.

Nottingham Forest give up on Brazilian midfielder – Offer not good enough

Liverpool player ‘not a champion’ – Slammed for simply ‘filling trophy...

Nottingham Forest give up on Brazilian midfielder – Offer not good...