Just like last summer, it seems Leicester City could attempt to make a late move for Sporting midfielder Adrien Silva.

Portuguese newspaper Record has a story today saying that in case the Foxes lose Danny Drinkwater to Chelsea, it’s the Sporting captain who would be the replacement.

Leicester would be ready to pay for what the Lions are currently demanding, which is a €25m fee. As Adrien has been wanting a Premier League move for a while now, a personal agreement shouldn’t be a problem. 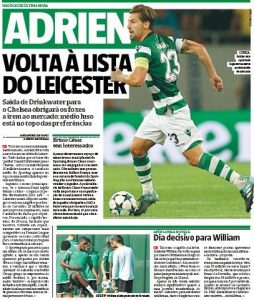 Record claims that both Leicester and Stellar Group, which takes care of Adrien’s career, would like to do things quickly. So there wouldn’t be any other parties involved, and a deal before the deadline would be possible.

In case you don’t remember, the player even gave an interview last summer saying he was joining Leicester, but the move ended up blocked by Sporting president Bruno de Carvalho, who demanded his €45m release clause in full.