Upon reading that, the assumption would be it came from Everton, who have been heavily linked to the player in the past couple of weeks.

But despite saying the bid came from the Premier League, the outlet doesn’t reveal the club which made it. They link Everton and West Ham at the end of the story, but don’t confirm that either of these clubs made the offer.

That’s pretty strange. And there’s something even more eyebrow-raising about this rumour. They say the offer was to buy 50% of Raul Jimenez’s registration.

Last summer, Benfica  announced they bought the other half, which had belonged to an investment company since Jimenez’s move from Atletico Madrid. West Ham had tried to sign the player back then too, but the third party ownership probably scuppered things, especially given the club’s history with such issues.

So with Benfica currently owning 100% of the player, there’s no way a Premier League club would make a bid for only half of it, especially because this kind of deal is not allowed in England. 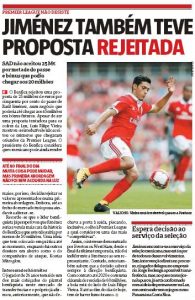 So either Record forgot that Benfica acquired the other 50%, something that they reported it themselves last year, or they are unfamiliar with the Premier League rules.

The newspaper also claims that the offer includes €20m in bonuses, a reason why it was very ‘tempting’ for Benfica.

When linking Everton and West Ham at the end of the article, they obviously recall that these clubs could still make bids today, which would be Jimenez’s biggest hope of making his move to the Premier League.

So it really looks like Benfica hope these clubs go for him before the deadline. Because this supposed new offer doesn’t sound like it exists.