Home Championship Leeds United get tough on January market: Will walk away if selling...
SHARE

Portuguese newspaper A Bola have an update on Tobias Figueiredo to Leeds United. Given it was A Bola who launched the story in the first place, they’re pretty well placed to explain the situation as it currently is.

Originally Sporting had been looking for a transfer fee between €3-4m for the young central defender, and it’s thought they’ll hold out for this for at least a little longer from now.

That isn’t what Leeds have been looking for and A Bola report Leeds United will walk away from the idea completely if they’re not offered the defender on a loan deal. It’s not stated specifically, but if Sporting offer some kind of loan with a purchase clause, based on appearances and perhaps promotion for Leeds, that could also be acceptable. 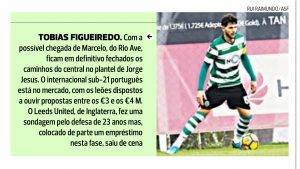 Leeds United took on a similar deal for Alfonso Pedraza during the last winter transfer window, and could consider the same again now.

There’s no other big interest for Sporting right now, and with Figueiredo very much for sale and very much needing games, there’s a chance of compromise.