Umaro Embalo to Manchester United has been a very up and down story in the Portuguese media.

First it was all happening, with very sure claims of a potential move to Old Trafford coming off, and insinuations Benfica would be very happy with the money received.

Then it was all off, with Benfica denying the claims.

In their Christmas Eve edition, A Bola state Benfica are once again warming to the idea of a January sale, and for around €13/14m the player can leave. With the winter window opening within days, that presents the possibility of a very quick transfer. 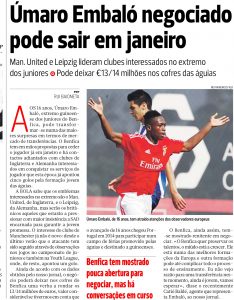 Manchester United and RB Leipzig are pushed forward as possible destinations, and the English club are said to be showing the most ‘insistence’ on getting a deal done.

Of course, this could all turn on its head again very quickly, but Manchester United interest in the 16 year old attacker at least seems genuine.