When Bruno Fernandes made a post on Instagram about Sporting’s situation this week, some fans may have even thought it’s a social media text from one more player who pretends to care.

But things are a little different with the club captain. We had previously seen him destroy two doors when fuming after being sent off in a league match. And now he’s shown his annoyance at the club’s form again.

On Friday night, Portuguese outlet CMTV released two audios from Bruno Fernandes where he slams his teammates and the local press, blaming them for what Sporting have been through. Both of the messages have been transcribed by Record.

The first one of them is about the ‘attitude’ of players who are only worried about ‘money’. 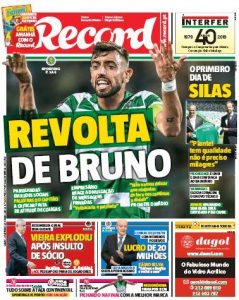 The second one, about the media, says fans have actually been right to be protesting against the team.

“They are focused on talking badly about players and giving news that only causes confusion and s***. Just yesterday ‘invasion of supporters’. What invasion? They went there to complain, it’s their right! They went there to sing and send some words. What do we want? We don’t beat anyone and we want what? Applause in all games? That’s all I needed, bro! Come and cheer us always! We lost at home against Famalicão and we want to be applauded… Applauded? Brother, go play with your c**k.”

The midfielder’s agent Miguel Pinho has spoken to Correio da Manhã, and condemned the leak: “Bruno Fernandes just wants to regret the illicit disclosure of private conversations, even more so in a truncated and decontextualised way, which has no purpose other than to denigrate his public image and cause damage to himself and Sporting.”

So far this season, Bruno has scored five goals and made four assists in seven matches, and that’s for a poor Sporting team.