With three goals and four assists in only five league games, Bruno Fernandes is having another great season, continuing to be in the same form he left the last one in.

But perhaps the Sporting captain, who was heavily linked to a Premier League move this summer, is a bit more moody now.

On Sunday, Bruno Fernandes scored the Lions’ equaliser against Boavista. During the chase for a comeback, the player ended up getting his second yellow in the 90th minute.

Nothing odd was reported at the time, but today newspaper Correio da Manhã comes up with an exclusive story showing the player has broken two doors on his way to the dressing room. 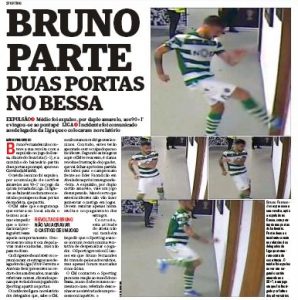 Correio da Manhã has pictures of him kicking the doors. They say a security guard tried to stop him, and there was an ‘exalted exchange of words’ between them.

It’s claimed that Boavista told the league delegates about the incident, and when hearing about this, Sporting tried to blame someone else.

When Correio da Manhã contacted the Lions, they claimed not to know anything about an ongoing process.