James Rodriguez is on the verge of becoming an Everton player. After weeks of rumours, he was pictured on Thursday evening at a restaurant in London, and will be expected to travel to Liverpool for a medical today.

This has generally been taken as good news in the media closest to Real Madrid. Zinedine Zidane hasn’t been counting on the player, and getting his salary off the accounts, as well as bringing in a transfer fee, is seen as an essential piece of business.

That doesn’t mean there hasn’t been some curiosity at what’s happened with James’ career.

Shining at the 2014 World Cup, there were some who thought he should have been awarded the tournament’s Golden Ball over Lionel Messi. He moved to Real Madrid following the tournament, with great hope attached to the transfer, and in the first season he scored 17 goals and added 18 assists.

It would have been more if not for a two month absence due to a broken metatarsal.

Those were the best figures he managed for Madrid, and in his first loan season with Bayern Munich in 2017/18, under Carlo Ancelotti again, he scored eight goals and added 14 assists.

Injuries have held him back to a certain degree, with there being a collection of small issues throughout most seasons. But the big barrier at Real Madrid is Zidane simply not being overly interested in him.

The author, Javier Aznar, is clearly a fan, but doesn’t hide away from the player’s issues, and has a few paragraphs which will be interesting for Everton fans.

He starts off by saying: ‘Francis Scott Fitzgerald said he liked to drink because when he drank things happened. I like to see James play because when he is on the pitch things happen: a pass to the space, a shot that only he sees, a custom cross or a giant grasshopper that perches on his shirt in the middle of a World Cup match. He’s that kind of player. Even in his most bland game, he’s capable of that great left-handed punch. 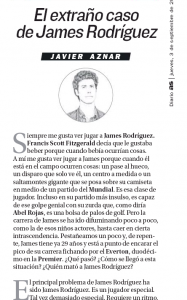 ‘But James’ career has gradually faded, like that of those child actors, until he fell into a certain insignificance. We blink a little and, suddenly, James is already 29 years old and is about to face the peak of his career by signing for Everton, twelfth in the Premier. What happened? How did we arrive at this situation? Who killed James Rodriguez?’

Aznar suggests the player’s main problem has been himself, he’s ‘maybe too special’ and requires a specific set of circumstances to be at his best. One of those is having Ancelotti as his manager, and whilst Aznar rightly suggests it’s never a good sign when a top footballer needs a particular coach to shine, it’s obviously not an issue for Everton right now.

Perhaps the best part of the column is when James is compared to a linen jacket: ‘For a while James became for Real Madrid that linen jacket that you have in your wardrobe and that may not be for every day, but when you wear it, you feel like the king of the world because nothing suits you better. You are unique with it. It is different from other jackets. But you can’t start your wardrobe there. And if you wear it on a winter day, maybe they look at you strangely, or you freeze with cold. It’s a slight eccentricity, a whim, almost a guilty pleasure. A luxury.’

Again, it’s worth pointing out Aznar is generally positive towards the soon-to-be Everton player, and ends his column by saying: ‘I’ll keep watching him play on the banks of the Mersey, sitting on the edge of the sofa, waiting for that moment. His moment.’