Home Europe ‘In June, it will be goodbye’ – West Ham to get second...
SHARE

One of the main points West Ham wanted to address last summer was at centre-back position, but all they ended up with was Craig Dawson on loan from Watford.

It wasn’t for lack of trying, either, with reports coming in late on of a push to sign Duje Caleta-Car from Marseille for €18m+, while other names were thrown around by newspapers.

Among those, according to Corriere Fiorentino on Wednesday, was Nikola Milenkovic, currently at Fiorentina.

The newspaper reveal the Serbian defender, who has been linked with a move to Manchester United in the past, was the subject of a €25m offer from West Ham, to which the Serie A side ‘said no’.

Wanting to keep him for as long as possible, Fiorentina turned Milan away as well, and have attempted, in vain, to get him to renew his deal, currently set to expire in 2022. 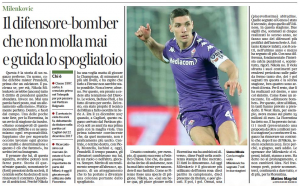 This refusal suggests Milenkovic appears to want to move at the next opportunity, and ‘that’s why, in June, it will be goodbye’.

Corriere Fiorentino go as far as saying the hopes the defender changes his mind ‘are zero’, but, ‘in the meantime, he will continue to give everything, and more, to Fiorentina’.

This could give West Ham a second chance at getting a player they clearly wanted, but it’s almost certain they will have to compete with ‘bigger’ clubs for his services, such is his reputation these days.