Craig Dawson was the only centre-back to arrive at West Ham United on loan from Watford in the last window.

However, the 30-year-old wasn’t the first name for the Hammers to strengthen the heart of the defence, with Marseille’s Duje Ćaleta-Car identified as a transfer target for David Moyes’ side.

L’Equipe now provides a background on why the deal wasn’t completed, even though the defender was ‘on the verge’ of moving to England.

The 24-year-old is managed by Stellar Group, the agency who also looks after Gareth Bale and recently added Rennes’ Eduardo Camavinga to their stable.

It’s claimed West Ham ‘arrived with an offer’ late in the window and it was bought to the Ligue 1 side by the Croatia international’s representatives.

According to the newspaper, West Ham made a bid of €22m and the ‘proposal was financially correct’ for the French club, who were ‘ready to discuss’ a transfer, as a ‘handful more euros plus bonuses’ could have ‘done the trick’. 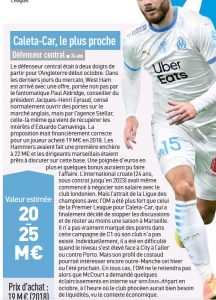 Ćaleta-Car had ‘even started negotiating’ his wages with the English side. However, the attraction of playing in the Champions League with André Villas-Boas’ side was bigger than playing for West Ham in the Premier League.

Therefore, the player decided to ‘stop talks’ with Moyes’ side in favour of staying at Marseille at least for one more season.

L’Equipe adds Marseille will not ‘hold him back’ as Ćaleta-Car’s profile could still be of interest for clubs in England for the winter market or next summer.