It was only a matter of time, but the idea of a Gonzalo Higuain- Alvaro Morata swap deal is presented as a possibility in Monday’s Gazzetta dello Sport.

First appearing back in May, this concept was always discussed at arm’s length, but the Italian newspaper have now decided to fully embrace, bear hug style.

In its early days, we wrote: “It’s also very convenient that Juventus would want at least €63m to sell Higuain, while Chelsea would want around €60m for the Spaniard. They don’t say it outright, but we will: swapsies?”

That was our tongue-in-cheek way of warning you this would inevitably happen, and just over a month later, it’s here.

However, Gazzetta, as much as they would love this deal to happen, make it very clear it’s just talk right now, but ‘more than one intermediary has set to work on these arguments to open the dialogue between parties’.

Marina Granovskaia has yet to make contact with Juventus’ director of football, Beppe Marotta, who values the Argentinian goalscorer at around €60-70m, but agents are at work before that would happen.

As for Alvaro Morata, ‘it’s clear to everyone’ he’d run back to Turin, and Max Allegri is said to be ‘happily prepared to redesign the attack with versatile performers’ rather than the ‘poacher’ system he currently has in place for Higuain. 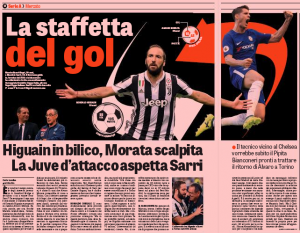 This all stems from Maurizio Sarri’s proximity to the Chelsea role, and talks aren’t expected to take place until he’s officially replaced Antonio Conte at Stamford Bridge.

When that happens, there’s said to be a willingness from the Serie A side to open discussions, as the swap idea has ‘fertile ground’ within the Turin offices.