We’ve reached a stage in the Alvaro Morata to Juventus saga where we’d be more surprised if there wasn’t a story written about it in one of the main Italian newspapers everyday.

Whether it’s Gazzetta dello Sport or Corriere dello Sport, you can be sure that, these days, one of the two (sometimes even both) will have dedicated a chunk of column inches to the Chelsea forward.

It’s the former of the two who get the ball rolling on Thursday, recapping the events that unfolded on Wednesday after Morata was photographed talking to Fabio Paratici, Juventus’ director of football, in Milan.

This, of course, has sent the rumours into overdrive, and Gazzetta even take some time to ponder what this could mean for Gonzalo Higuain, who has been the Serie A champions’ centre of attention up front for the past two season. 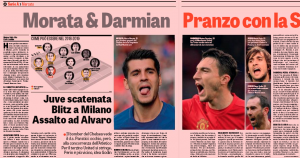 They already did this on Tuesday, suggesting Paris Saint-Germain were interested in the Argentinian striker, but on Thursday, they also decide to throw Chelsea into the mix, because why not?

After all, in their head, should Morata return to Turin, the Blues would be in need of a new goalscorer, even if that remains debatable, with Olivier Giroud and Michy Batshuayi already at the club.

It’s also very convenient that Juventus would want at least €63m to sell Higuain, while Chelsea would want around €60m for the Spaniard.

They don’t say it outright, but we will: swapsies?

It worked for the Alexis Sanchez and Henrikh Mkhitaryan deal, so why wouldn’t it for this one? Right? RIGHT?