According to PericosOnline, the two Premier League clubs have joined Valencia in making an offer for the player, who can play in the back four or as a defensive midfielder. He made 33 appearances as a defender, and was deployed as the holding midfielder on four occasions in La Liga last season.

Espanyol are also aware of the interest from Tottenham, Newcastle and Valencia in signing the versatile star. Lopez has a €40m release clause in his contract and the La Liga outfit are unwilling to reduce the price tag.

Lopez has already played under Newcastle manager Rafael Benitez, when they were at Napoli. The Spanish coach believes the addition of the Espanyol star to the Magpies squad can help the Tyneside club challenge for a place in the first half of the table.

The report also claims that Tottenham manager Mauricio Pochettino has “personally called the player”. Lopez had earlier admitted that Espanyol will take a decision on his future, if they receive an offer for his signature.

“If a proposal comes one day, the club will have to decide. I’m where I want to be. I am happy. I feel comfortable and not only depends on that. Professional careers depend on many other things regardless of what we would like,” Lopez told the club’s official website. 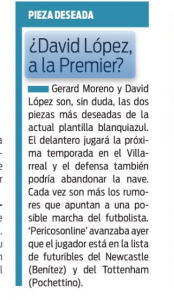 Pochettino making a personal call would be no surprise if Tottenham interest is genuine, given the Spurs boss is said to have done that several times.

Catalan newspaper Sport carry the Pericos claims in Thursday edition, but don’t add anything to the story.