With Gonzalo Higuain already leading Juventus’ frontline, the idea that Alvaro Morata could be returning to Turin was always a bit of a question mark.

However, should the Argentinian star end up leaving the Serie A champions, then a move for the Chelsea forward would certainly be on the cards.

It’s a big ‘should’ because the only club who appear to have an interest in Higuain are Paris Saint-Germain, but their finances, after deals for Neymar and Kylian Mbappé, are currently being investigated for potential Financial Fair Play breaches.

While Juventus know they won’t get their €90m back, Gazzetta dello Sport, who are running the story, believe a €60m offer could convince a few in Turin to agree to a deal. 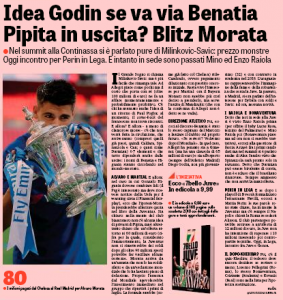 As for Morata, now is seen as the ideal time to get him, coming off a rather tepid first season at Stamford Bridge and the recent discovery he won’t be going to the World Cup in Russia with Spain.

This would then allow him, were a deal to be struck, to settle in with the Juventus group as early as July 1st.

Gazzetta believe a deal à la Juan Cuadrado (a long-term loan with payments over the course of the deal) could be on the cards in order to get a deal done; an idea Tuttosport were first to report last week.

The Italian newspaper certainly don’t discount the possibility of Morata still joining even with Higuain still there, but it seems the preference would be for a more versatile forward, like Anthony Martial, arriving instead should the former Napoli goalscorer stay.