Home Championship There is ‘chatter’ player could be signing for Leeds United, defender set...
SHARE

After a slippery career spell which saw him end up on a short term contract at Dundee, Jon Aurtenetxe is now without a club.

Linked with Leeds United for some weeks, it isn’t the craziest of ideas.

Aurtenetxe by far enjoyed the best period of his career under Marcelo Bielsa at Athletic Club Bilbao.

Getting to the Europa League and Copa del Rey finals, and unfortunately losing them both, the defender won’t have expected to be without a club at the age of 26.

There hasn’t been a series of bad injuries or anything obvious to explain the slide. Ernesto Valverde came in, preferred Mikel Balenziaga at left back, and then a series of what look to be rash career decisions followed.

Mundo Deportivo say there’s ‘chatter’ the footballer could be off to Leeds United, and that will again be because of the Bielsa connection. Since his permanent Bilbao exit (having already been on loans to Celta and Tenerife), Aurtenetxe has played for Mirandes, SD Amorebieta and Dundee, all for short periods of time. 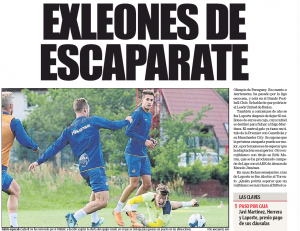 If Bielsa remembers the player and their connection then the move could be worth a gamble.

Having already shown a willingness to sign a short term contract with Dundee last year then he’d surely be up for similar with Leeds so there’s not a great deal to lose.