Home Premier League Faustino Asprilla says he could be off to Newcastle for barbecue at...
SHARE

Former Colombian forward Faustino Asprilla spent two seasons at Newcastle United between 1996 and 1998. During his time at the Tyneside club, he shared the dressing room with Magpies legend Alan Shearer.

Asprilla and Shearer are now rooting for their respective countries, Colombia and England, as the two nations will face each other in the knockout stage of the 2018 World Cup.

The two have been friends since the played together at Newcastle. As the fixture between the two countries was confirmed, Asprilla and the former England international striker started exchanging tweets on the social media platform.

The South American was not a part of Colombia’s squad when they crashed out of the group stages in the 1998 World Cup. Asprilla was dismissed after Colombia’ defeat against Romania for his remarks against the then coach, Bolillo Gómez.

Asprilla has now revealed that he will have a barbecue at Shearer’s place in Newcastle, if England beat Colombia in the World Cup on July 3rd. 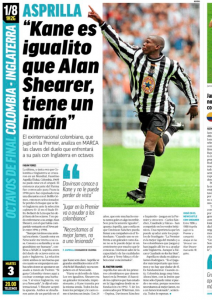 “We always had an excellent friendship. When I’m in Newcastle, he invites me to his house. I know his family and he is a great human being. If Colombia win, you [Shearer] come here to cook barbecue with me. And if England wins, I’ll go to Newcastle,” Asprilla told Marca.

And everyone is invited, surely.