At the end of the winter transfer window, Yannis Salibur was supposed to be a Hull City player.

Marco Silva recruited several player during the January window in an effort to keep Hull in the Premier League. Salibur was supposed to be one of those, with Hull City agreeing a fee with the player’s club Guingamp.

It was a big chance for the midfielder, he’d be getting the chance to play in the Premier League as well as a much better financial package with Hull City, when compared to what was on offer at Guingamp.

Unfortunately for all involved, the move fell through at the last minute, and Salibur was left hugely disappointed. Despite everything being agreed, time simply ran out of time to get the formalities sorted. 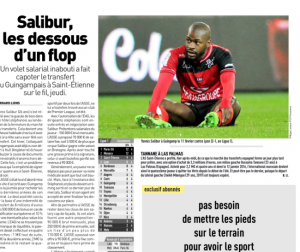 Given all of that it may have been expected that Salibur would have left Guingamp earlier on this summer, but, surprisingly, similar happened to him again.

Despite having a medical to join Saint-Etienne on Thursday, Salibur couldn’t agree on the structure of his wages in time, and went through another failed move.