FC Girona have become the third Catalan club in Spain’s top flight. Joining Barcelona and Espanyol, Girona have a lot of planning to do if they don’t want to go straight back down.

Marca claim in their Thursday edition that Girona are looking to complete more than 10 signings during the summer transfer window, and presumably a lot of those will be on a loan basis.

According to the Spanish newspaper the first two on the list are Marc Muniesa and Alex Garcia. The latter makes a lot of sense given Manchester City’s connections with Girona. The 19 year midfielder would likely benefit from a year in La Liga, and with Pep Guardiola’s brother Pere having a stake in Girona, it all falls into place. 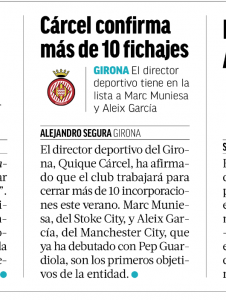 Muniesa will be harder for Girona to pull off. The 25 year old was repeatedly linked with a move to Betis during the winter transfer window, but Stoke weren’t prepared to let him go for a nominal fee.

Girona would have to pay a few million to get the defender from Stoke, and given the Catalan club are recruiting so many players, that’s a big chunk of their budget.

Garcia from Manchester City will be the easiest, and so likely also the first.