Of the many things to get excited about in football, few things are quite as exhilarating as the emergence of new, young talent.

Fans across the world all hope for talent to emerge at their club, and when one does, it naturally creates an enormous sense of interest.

That’s certainly what’s happened with Karamoko Dembélé and Celtic. The Ivorian is only 16-years-old but has been creating a buzz in Scottish football for some time.

He first came to attention when making his debut for Celtic’s Under 20 side aged just 13 in 2016, before later making his senior debut in the 2-1 win against Hearts back in May of this year.

Rather than a gimmick, it’s been widely agreed he’s a player with plenty of talent, particularly when it comes to taking on opponents, and one that could have a bright future in the game in the years to come.

And, it seems that buzz is spreading far and wide, with Guillaume Beuzelin, a coach at Hamilton, admitting his youth teams often looked out for Dembélé’s name on team sheets. 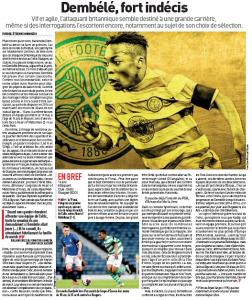 “He has a real sense of purpose and a real intelligent game. He loves to attract opponents to him before sending a decisive pass to a teammate,” he told L’Equipe.

“In recent years, when my kids were facing a team Celtic, all week they asked me if Dembélé would play against them or if he was going to be promoted to a higher age group.

“And on Saturday, they waited feverishly for the team sheet. The presence or absence of Karamoko completely conditioned their preparation.”

That sense of excitement is one that even the senior pros are experiencing when it comes to Dembélé.

Clévid Dikamona watched from the bench as Dembélé made his debut against his side Hearts in May and was impressed by what he saw.

“In one against one, he has enormous abilities, he’s amazing,” he added.

“I knew Riyad Mahrez at Le Havre, who showed the same kind of qualities. Except that Riyad expressed them in CFA (France’s fourth tier) at the age of 19 while Karamoko is already able to evolve in the pros, at only 16 years old.”

Claim Wolverhampton have wrapped up loan for exciting prospect – Have...