With more and more money in the game, football players are treated as commodities consistently.

It’s often forgotten that they have lives outside of football, often dealing with the same problems that we deal with in our day to day lives.

Pierre-Emile Højbjerg can attest to that. The Southampton midfielder has enjoyed a varied career, having played in the Bundesliga and the Premier League and featured over 25 times for his country Denmark.

Life off the pitch has not been as kind, though, with the midfielder’s father discovering he had stomach cancer back in August 2013, when Højbjerg was breaking through into the Bayern Munich first-team.

The German club organised treatment but did not cover the entire cost, leaving the Southampton man to foot the last part of the bill.

That, you would think, isn’t a problem for a professional footballer, but that wasn’t the case. Højbjerg was only on a modest salary with the Bundesliga giants and instead had to fight to get the money together.

“What saved me was that I got appearances for the first team,” he told TV show ‘Sat af’, relayed by Ekstra Bladet.

“I would get a pretty big bonus for just one game,” he told the show.

“I got four matches, and three of them helped me to pay for the last of the bills. So I not only got to play but also achieve something even bigger.” 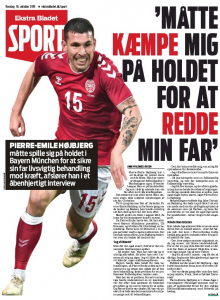 Sadly the treatment was unable to save Højbjerg’s father, who passed away in April 2014 despite his and his son’s efforts.

That, unfortunately, meant he was not alive to see his son make his international debut a month later, or witness his first international goal two months after that.

And the Southampton man admits it was at that moment, scoring his first goal for his country, when his father’s death hit home.

“Where the grief hit me most was when I scored my first national team goal,” he added.

“Because that is one thing I would share with my dad — just a second. High-five, hugs, just as much. And so on.

“I got a sore stomach – I got so bad. I couldn’t look forward to the weeks and months after.”