Pablo Fornals and Dani Ceballos both arrived in the Premier League this season hoping it could help them take the next step in their careers.

Ceballos moved to Arsenal on loan from Real Madrid, with hopes of regular games allowing him to be a contender for Luis Enrique’s Euro 2020 squad. Fornals transferred permanently from Villarreal to West Ham, probably also having an aim of being in contention for the summer tournament.

The pair know each other well, having won the 2019 U21 European Championship with Spain together, and on Saturday their new clubs are facing each other in the Premier League.

Fornals has had a chat with Marca this week, and was asked about playing against Arsenal at the weekend, and meeting up with his friend.

The West Ham player is clearly confident about his side’s chances and sent out a warning to Ceballos: “We have been playing together or against each other since we were 15 years old. It’s nice to meet in London, but I warn you that we’re going to win. For two hours, Dani won’t be my friend [laughs].” 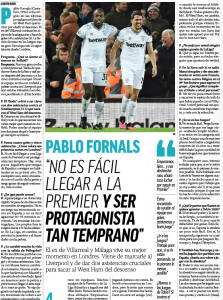 Both will hope to have an impact on the match at the weekend, with Fornals, in good form for the Hammers, likely expecting to start, and Ceballos hoping for the same after his return to Mikel Arteta’s side.