After their title winning campaign, KRC Genk lost a few of the stars last summer and they strengthened the squad by bringing new faces to the club. One of them was Ianis Hagi.

The Romanian failed to impress in the first half of the season, as Genk also struggled with results.

In the winter market, the Jupiler Pro League side allowed the 21-year-old to join Rangers on loan until end of this campaign and they have an option to make his transfer permanent.

Belgian newspaper Het Belang van Limburg sat down for an interview with Genk technical director Dimitri De Condé and they asked if there were high expectations from Hagi before the move to Rangers.

“I don’t like to talk about individual players. But we were convinced of Hagi that he could provide extra creativity in that new midfield. Because we had to look for the balance, it was difficult,” De Condé said.

“Then you have to make a decision in January. As a technical director, do you have to keep saying that he will definitely play more to keep him on board? Or be honest and also take his interests into account?

“I always opt for the latter, I make sure that young, promising players also like to come to Genk.”

Hagi has impressed for Steven Gerrard’s side and has been vital in helping the Scottish side progress to the last 16 of the Europa League. He’s managed three goals and two assists in all competitions for Rangers.

De Condé is delighted for the player and he believes Hagi is getting to play in his preferred position at Rangers. 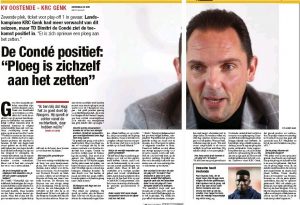 “That makes me happy. He plays on the right, on the inside. That was also his position in the practice match against FC Koln. Sometimes it’s really a complex story why a player is top at one club and ends up on the bench at another,” the Genk chief explained.