On Friday evening, Marca came with a big claim saying Gareth Bale is on the verge of leaving Real Madrid for Jiangsu Suning.

Then many other media publications pushed their own versions of the story, many picking a fee they believed the Chinese club would be paying for the Welshman.

Well, Marca have another claim in their Saturday newspaper, and they report a transfer fee of their own.

Jiangsu Suning could even announce the player’s arrival today, despite him taking part in Real Madrid’s 7-3 defeat to Atletico in the early hours of this morning.

Once again it’s explained Bale will earn a salary of €22m per season, after tax, on a three year deal. 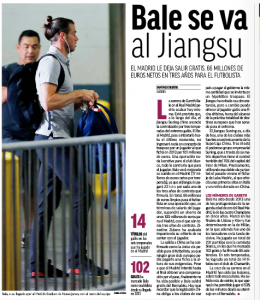 Real Madrid have been ‘trying until the last moment’ to get a transfer fee, yet Marca believe they’ve failed. Had Jiangsu Suning paid a fee they would have also had to pay the same amount to Chinese authorities to help the development of football in the country.

Zinedine Zidane has won his power struggle, and there’s already a feeling around Madrid that trouble could be ahead. The friendly loss on its own doesn’t mean a great deal, other than embarrassment, but the pressure is already on the manager after a very poor end to last season.