Four days ago, we carried a report from Mundo Deportivo, who explained that Everton, Arsenal and an unknown club in England have informally asked Barcelona about Malcom.

The Brazil international arrived at the Camp Nou from Bordeaux in a deal worth €41m last summer, and the La Liga winners’ idea is to offload him in the ongoing window.

On July 26th, the online version of the same newspaper explained the Toffees and the Gunners are among the ‘best placed’ clubs to sign the 22-year-old.

Mundo Deportivo journalist Miguel Rico now claims the Blaugrana will need more than what they paid Bordeaux to sanction Malcom’s sale, and only two clubs are approaching those figures.

Mundo Deportivo headline their article ‘Everton: Who else?’, and it’s claimed the Toffees have put €40m ‘on the table’ for Malcom. That’s not thought to be enough, but, in reality, it should be. 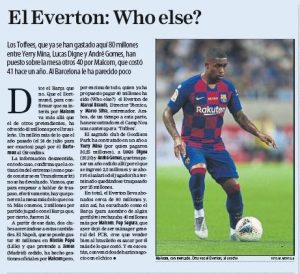 Napoli are another club who have made official efforts to sign Malcom, but they are also chasing Lille’s Nicolas Pepe and James Rodriguez of Real Madrid.

Marcel Brands and Marco Silva are said o have found a ‘quarry’ at Barcelona, and the clear suggestion is there could be further business.