Takvim report the only issue stopping Galatasaray and Ryan Babel getting a deal done is the attacker’s signing on fee.

We covered reports from Turkey last month that the Fulham man is close to agreeing a deal with Galatasaray and the Turkish side are ready to pay him €2.5m per season to make this happen.

However, Takvim say talks over a move for the Fulham player have stalled due to his high demands. It’s reported Galatasaray will look to solve the issue as soon as possible as the Istanbul club are concerned about competition from other clubs to sign the Netherlands international. 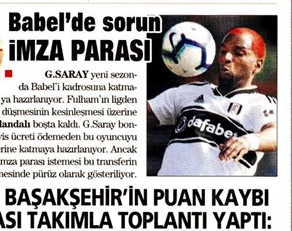 Babel, who will become a free agent at the end of the season, has scored four goals for Fulham since arriving at Craven Cottage in the last window.