In January 2018, a series of poor results saw Watford win just three out of 16 league games and it forced the Hornets to part ways with Marco Silva.

Javi Gracia was appointed as Silva’s successor and under the guidance of the Spaniard, the Hornets added just four more league wins until the end of the 2017/18 campaign, but this season has been much better.

They are currently seventh in the table with 50 points after 35 games and have made it to the FA Cup final, where they will face Manchester City at Wembley.

When Gracia arrived at Vicarage Road, the Premier League club were in a difficult state and there was instability at the club.

The 48-year-old gave an interview to Mundo Deportivo and explained how things have changed at Watford since he took charge of the club.

Gracia said: “When we arrived last year, it was a situation of change of coach, in a time of difficult results, a lot of injury, a lot of instability in the club.

“We have achieved improvement overall, the players, the coaching staff, the club overall to give stability, to improve every day, and every time to make a more competitive team in a league where there is a lot of equality.”

Gracia joined the English club on an 18-month deal, but earlier this season, Watford handed him a new deal and his current contract lasts until 2023.

When Mundo asked Gracia “do you see many years in the Premier [League]? He said, “I do not think about that. In my profession it is not healthy.” 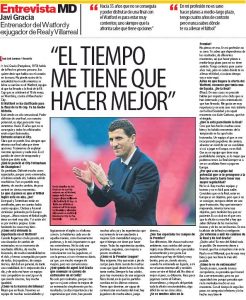 “You know that we depend on the results, at different times, so making medium-long-term plans for me does not make sense. I have a contract for four more years, but you do not know where football is going to take you, or how long I will be here.”