As Fulham are still to make the arrival of João Palhinha official, the Portuguese media continues to bring some updates on this transfer.

According to newspaper Record, the midfielder has already spoken to Cottagers’ manager Marco Silva, who had a chat while the player is still in the Maldives, where he’s spending his holidays.

The outlet insists there’s an agreement in principle, following an offer from Fulham worth €20m.

The report recalls that the Whites had initially put on the table a bid for €18m plus €2m in performance bonuses, and following a rejection from Sporting, they agreed for the amount to be paid at once. 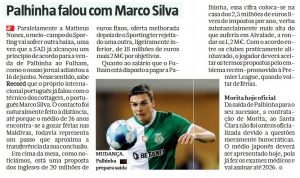 Record adds that Palhinha is set to make €2.5m gross per season, which is twice as much as what he used to earn at Sporting.

They say the agreement is ‘practically’ done, as the payer ‘should’ accept the personal terms, but that will only happen after his holidays, meaning Fulham fans will need to wait a little longer.